The spectators were able to choose the language they prefered between French, German and English.

Three out of the four actors from the Saarbrücker Staatstheater that gave their voices in German to the characters were able to attend the show along with the translator, Andra Joeckle. It was a great experience for the actors to meet their German alter egos.

The German adaptation of the show was a partnership between Begat Theater and Le Carreau – Scène Nationale de Forbach et de l’Est mosellan, the Théâtre National de la Sarre, SR2 Kulturradio and l’Institut d’Etudes Françaises de Sarrebruck, the text of  the show was translated into German and recorded on October 15 and 16 2014 in the studios of the radio SR2 Kulturradio in Saarbrücken, Germany. 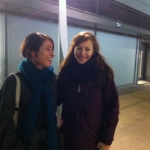 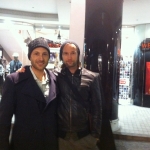