Translations: The show is available in French, English and German. Each spectator is free to choose his or her language. The show has also been adapted for the blind and visually impaired.

Number of shows per day: 2

Workshops: a workshop is available for middle school or high school students which includes a discussion on the role of the spectator in outdoor performances followed by an excerpt of the show in an urban setting outside of the school

Hidden Stories is an invisible performance, a site-specific event that blends itself into the urban landscape. Supplied with headphones, the audience is temporarily endowed with the power to hear the thoughts of certain passers-by and to follow them into the unknown. A single rule of thumb: follow an ordinary object (an orange, a newspaper, a box of matches, or a pen) as it makes its way through the streets of the city.

Begat Theater creates four disparate slices of life, four separate yet parallel stories. The audience follows these characters, slipping into their heads and delving into their deepest secrets. They are alert yet discreet; everyone they see is potentially part of the show.

“The performance is visible for those who are aware that it’s happening.”

The sound-scape detaches the spectator from the real world and plunges him into a world of fiction, opening his eyes as well as his ears. No two groups of audience see exactly the same thing.

The city is transformed into a sound stage, the audience’s eye is the lens of a camera, and the spectator himself is the editor, choosing which images to synchronize to the sound track being played in his ears. He is free to follow the story from up close or from far away, to look at each detail, each gesture, each blink of an eye, or to let himself be carried away by his own imagination and abandon himself to the urban decor.

The anonymity of city life, sometimes suffocating and other times liberating, is the question at the heart of the piece. “How can I live in a city of thousands, or even millions, and yet still feel so alone?” 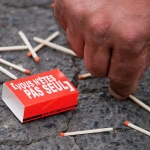 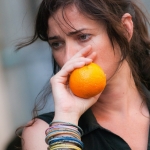 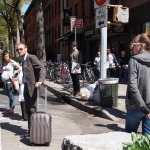 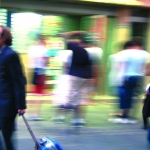 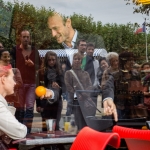 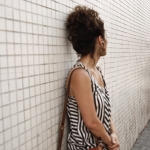 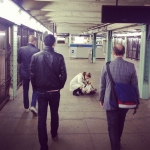 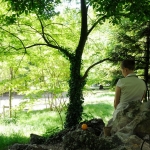 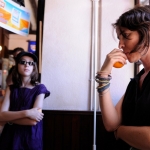 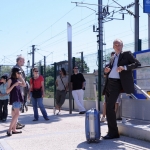 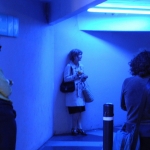 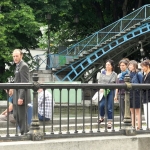 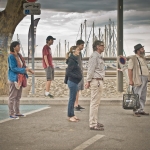 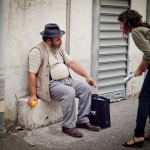 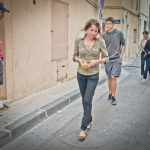 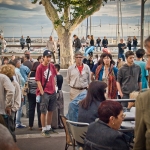 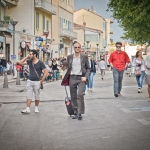 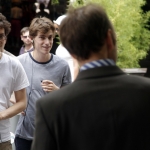 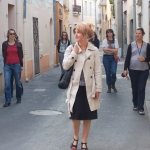 “Blurring the Lines. Can we be in two places simultaneously? Can we alter what is real with what is fiction? Can we abandon ourselves and yet be fully in control? And what does theater have to do with any of this?… Begat Theater’s Hidden Stories enabled its spectators to enter a journey as if they were reading three dimensionally, where the characters and setting are embodied all around you. I saw Hidden Stories early in May 2013 in the streets of Fort Greene, Brooklyn, where it premiered in the US as part of mars2bklyn, an ongoing platform of exchange between artists from Brooklyn and Marseille”. Read more  – HowlRound, a center for the theater commons (USA) – June 2013

“A completely new experience which must absolutely be seen… like a film that mixes reality and fiction, “Hidden Stories” is a separate category of street art… A poignant and strange adventure that shouldn’t be missed.” -L’Impartial (SWITZERLAND) – August 2010

“Reveries for solitary walkers.The city is filled with hidden stories, with scenarios waiting to be discovered under every stone. Begat Theater and the Théâtre de l’Arpenteur make them appear from the inner depths of headphones, for their audience of walkers. “Walk man.1″ and “Hidden Stories” reveal the almost magic power of sound to summon a fictional world without “distorting reality”, to use Karin Holmström’s expression. These walks embark the spectator, alone or sometimes in groups, on an urban exploration, and place the act of walking at the heart of their approach. They favor listening and “simply looking at the city” as opposed to “elaborate sets”, remarks Dion Doulis, therefore joining a tradition which aims to reveal theatricality at the heart of everyday life. They question the relationship between actor and spectator and play with the multiple possibilities of pre-recorded and amplified voices. All these ingredients make for a stimulating renewal of the urban sound walk. -Magazine La Stradda (FRANCE) – January 2013

“With a solid reputation for quality, Begat Theater is a street theater company that always creates a singular link between the spectator, the performance site, and the public space. After its memorable installation-show The Village Idiots (inspired by Jeanne Benameur’s novel), Karin Holmström proposes a surprising sound-walk in the city. Equipped with headphones, one only needs to follow an orange, a newspaper, a box of match or a pen, as it passes from hand to hand in order to discover the hidden stories of their owners. An intimate, stirring treasure hunt. A tracking shot between the real and the imaginary.”“The festival “Roulez Carros” owes this surprising and interactive street show to a very original company: Begat Theater. Street theater that speaks to the senses, that destabilizes and pushes aside preconceived ideas.” -Nice Matin (FRANCE) – September 2012

“In a remarkable change of pace and a bold indication of this festival’s artistic ambition, Hoopla presents French theater group, Begat with Hidden Stories (Histoires Cachées). Audiences will follow the cast around Darling Harbour for a performance which few passers-by will be aware of. Wearing headphones, the audience listen to inner thoughts of characters as they weave and merge through storylines.” -Darling Harbour News (AUSTRALIA) – April 2012

“Begat Theater proposes a sound walk in the streets of the town. The audience is not safely tucked into their seats, watching and listening to a theater piece, rather he’s the principal actor.” – La Provence (FRANCE) – May 2010

TTT (highest rating) “Four slices of live, four stories hidden within the meandering city streets, reveal themselves as we choose to follow the journey of an orange, or a newspaper, or a box of matches, or a pen. These ordinary objects move between the hands of four equally common individuals: complete strangers whose paths cross briefly, before going off in different directions. Equipped with headsets, the audience follows each one of these characters and listens in on their every thought. They slip into the secret world of these strangers whom, ordinarily, they wouldn’t even have noticed. After it’s remarkable and acclaimed piece “Les Demeurées”, Begat Theater presents an insightful and deeply moving performance in the heart of the public space. An unprecedented experience, a story in which the spectator becomes an unwitting, and unexpected, actor.” -Télérama (FRANCE) September 2011

“From July 20th to the 24th this year, and for the 25th year in a row, artists have once again invaded every square inch of the city streets. A piece of pavement, a streetlight, a wall… Not much is needed for art to become integrated into the urban environment. At this game four companies in particular excelled. Beginning with Begat Theater and its show Hidden Stories, the spectator, listening to a text via a headset, is invited to follow an object through the streets as it passes through the hands of several characters, unraveling the threads of their lives as they move within their interior labyrinth. A three faceted optical illusion is revealed: reality becomes blurred, the theatrical asserts itself as real, and those on the outside look on in a disbelieving way at the spectator.” – L’Humanité (FRANCE) – July 2011